6 things you need to know about hormone therapy 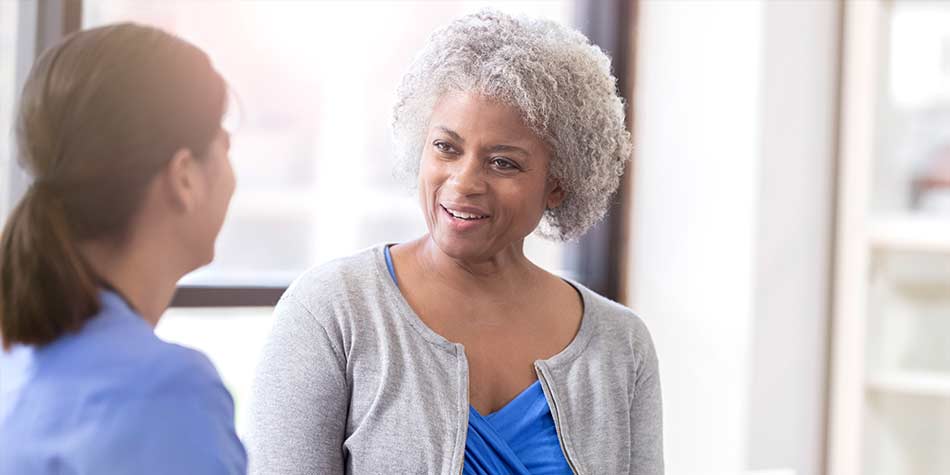 If you’re going through menopause or perimenopause, you may be experiencing symptoms such as hot flashes, sleep problems, vaginal dryness or changes in your menstrual cycles. These are all normal side effects of the “Big M” but they can still be uncomfortable.

You don’t have to suffer in silence, says Erin Mateer, MD, an HCA Healthcare physician. There are a number of options available, including hormone replacement therapy (HRT) — sometimes called hormone therapy (HT) and technically known as menopausal hormone therapy (MHT).

Whether you call it HRT, HT or MHT, the formula generally consists of two hormones, estrogen and progestin. Estrogen is the hormone that relieves menopausal symptoms, explains Dr. Mateer. But it can also cause cells in your uterine lining to overgrow (a condition known as endometrial hyperplasia), which may lead to cancer. So, if you have a uterus, you’ll also need to take progestin to counteract that uterine overgrowth. If you don’t have a uterus because you’ve had a hysterectomy, you’re typically just given estrogen.

You may have heard about how HRT fell out of favor in years past, when the Women’s Health Initiative (WHI) — a trial funded by the National Institutes of Health — found in 2002 that women who took HRT had an increased risk of heart attack, breast cancer, blood clots and stroke. But the thinking on therapy has changed since then.

This change was partly due to a reconsideration of the WHI’s limitations. For example, the study looked only at orally-administered HRT and included only a limited number of women younger than 60-years old, the population best-suited to receive and benefit from HRT. Considering all the available research together — including newer studies, re-analyses of the WHI’s results and reviews of other research — experts and authorities, such as the North American Menopause Society, now recommend short-term use of HRT for certain groups of women.

“The pendulum has swung back in the opposite direction,” notes Mateer. “We’re now advising it for younger women because they may actually get some protective side benefits when it comes to their heart and bone health,” in addition to symptom relief.

The primary recommended uses for HRT are to address:

HRT may also offer relief for achy joints and — when used alone or in tandem with an antidepressant — low mood or depression during menopause.

If you’re considering HRT, here’s what you need to know.

It’s only recommended for women under 60

“The perfect candidate is a woman younger than age 50 who is either going through perimenopause or actual menopause, who has no cardiovascular risk factors, and is a non-smoker,” says Mateer.

More broadly, HRT is considered a safe option for anyone who is within ten years of menopause or younger than 60 and doesn’t have a history of breast cancer, heart disease, previous blood clots or stroke, or liver disease.

Take it for the shortest time possible

If you do decide to take HRT, it should involve the lowest effective dose for the shortest time needed to provide relief from symptoms. How long is the “shortest time?” Talk to your doctor about the dose and duration that makes the most sense for your health profile, but experts generally recommend taking it for no longer than five years or beyond the age of 60.

Most women don’t have any trouble stopping HRT once they’ve started. Studies show that 40 to 50 percent stop within a year of starting therapy, and up to 75 percent stop within two years. When you do end HRT, some experts recommending tapering off your dose rather than stopping cold turkey.

There are different forms of HRT

The most common form is an oral pill, but there are also skin patches, rings and tablets that are placed in your vagina, and even creams and sprays you apply to the skin. If a woman is an iffy candidate because of concerns about blood clots, she’s probably better off using the patch rather than taking a pill. That’s because the hormones in the patch are absorbed directly into the blood through the skin — bypassing the digestive system and the liver where clotting factors can be affected, which may reduce the risk for blood clots.

If you have only vaginal symptoms, such as dryness, the ring or tablet may be a good option. “It’s broken down by the vaginal cells and stimulates receptors to help relieve dryness and pain,” Mateer adds. There are also vaginal creams that you insert via an applicator.

If you and your doctor decide that hormone therapy — in any form — just isn’t right for you, there are other options, stresses Mateer. While they generally aren’t as effective as HRT, anti-depressants including paroxetine (Brisdelle), venlafaxine (Effexor), desvenlafaxine (Pristiq), citalopram (Celexa) and escitalopram (Lexapro) have all been shown to improve hot flashes. An anti-seizure medication, gabapentin (Neurontin), usually given at bedtime, could offer relief as well.

Black cohosh, an herbal product, is often touted to help with hot flashes, as are plant-derived estrogens called phytoestrogens. But studies haven’t consistently shown that these so-called natural treatments help. It’s best to steer clear of over-the-counter remedies unless you’ve gotten the green light from your doctor.

Stay away from bioidentical hormones

Some women turn to “bioidentical” hormonal replacement products compounded in pharmacies because they believe they’re safer than conventional hormones, says Mateer. But these treatments are not regulated by the U.S. Food and Drug Administration (FDA), so there’s no guarantee of quality control. They may also contain hormones such as testosterone and dehydroepiandrosterone (DHEA).

In short, Mateer stresses, there’s no good evidence that bioidenticals either work or are safe for long-term use. The American College of Obstetricians and Gynecologists recommends FDA-approved hormone therapy instead.

Why poor sleep could derail your weight loss goals

August 12, 2019
Poor sleep affects more than your energy level and alertness. Learn why it can trigger a cascade of hormonal changes that may lead to weight ...
Previous Post

Can this drink increase your risk of stroke?

July 22, 2019
These drinks may give you a burst to meet a deadline, but consuming them is linked to serious health problems, including an increased risk of...
Next Post
Back to blog home

The Secret to Perfect Summer Legs

Are these household chemicals bad for your health?

Halloween at the ER is no treat

How your diet could affect your thyroid